Summary:
The 17 Days Kenya exploration is a fully serviced journey offering an opportunity to spot
Africas; Big Five; plus many other wildlife species in Kenya’s national parks, coupled with
amazing cultural encounters. This expedition climaxes with 3 days of leisure at the beautiful
Indian Ocean coast.
 Destination – Samburu National Reserve, Lake Nakuru National Park, Maasai Mara
Game Reserve, Naivasha National Park, Amboseli National Park, Diani, Tsavo East
National Park and Tsavo West National Park.
 Activities – Game drives, Scenic viewing.
 Tailor-Made- We are specialists in personalized, tailor-made travel and your holiday
will be custom-designed to suit your requirements. We are all individuals, so why be tied
to a set group tour or a set itinerary? Our experienced staff can help you design your own
individualized holiday. Explore at your own pace, choose your own style of
accommodation, and include your own choice of sightseeing and activities.
 Accommodation – It is valid and will greatly depend on your budget. We can and will
help you choose from the list when planning your trip. At whatever level, we provide the
very best for our guests. Kubwa Five Safaris reserves the right to substitute equivalent or
superior hotels. If a hotel of equivalent standard is not available Kubwa Five Safaris may
substitute the next best quality hotel or suggest a superior at an extra charge. There is free
Wi-Fi in hotels.
 Transportation – 4×4 Safari Landcruiser / Minivan (up to eight passengers) with pop-up
tops and seven window seats for game viewing. Groups of twelve or more people who
would like to travel in one vehicle are offered 25-28 seat coasters that have about 16
window seats. Our Safari vehicles are well maintained to provide maximum level of
comfort and safety.
 Our Drivers /Guides – We recognize this for a fact! The success of your safari will
largely depend on your driver/guide. It is because of this that we have a great team of
carefully selected drivers /guides, well trained.

On your arrival, Kubwa Five Safaris representative with your name printed on an A4 paper will
welcome you at the airport and depart for the dramatic semi-arid scrubland of the Northern Frontier arriving in Samburu by lunchtime. After lunch embark on a game drive to sight resident wildlife species like the Reticulated Giraffe, Gravy’s Zebra, Beisa Oryx, and the Blue-necked Somali
Ostrich is rare elsewhere in the country. Dinner and overnight at Samburu lodge, (Full
Board).
Samburu Lodge is set in a rugged landscape with a backdrop of jagged mountains, Samburu is
host to indigenous animals unique to the region. Samburu Lodge is situated in the Samburu
National Reserve with cottages, bandas, single and twin rooms spread out along the stunning
banks of the Uaso Nyiro river. The main dining room is open on the riverside with long tables
and large buffets. The ever-popular Crocodile Bar overhangs the water and is a great vantage
point for the nightly crocodile feeding. We have rooms to meet the needs of all explorers from
luxury cottages and bandas to single and twin rooms. All our rooms are decorated to the highest
standard and overlook the river.

Today you will spend the full day in Samburu National Reserve. You will have early morning
and evening game drives. Meals and overnight at Samburu lodge, (Full Board).

After breakfast, we proceed to Aberdares national park. Lunch at the base hotel before being
transferred to the Tree hotel for an overnight stay. A special feature of Treetops Lodge is the
floodlit watering hole where we can watch from the lodge itself throughout the night as a great
variety of animals come down to drink.
Dinner and overnight at Treetops Lodge, (Full Board).Treetops Lodge, located in the Aberdare National Park, the Treetops Lodge Nyeri tree-house lodge on stilts is famous as the place where Queen Elizabeth II visited as a princess and left as queen. Large windows have been fitted in all Treetops Lodge Nyeri rooms and public areas to view the game and there are restaurants and lounges where guests can relax while taking in the sight of Elephants, Buffalos, and more. Photography hideouts have been created next to the watering hole to get you as close as possible to the animals.

Depart Aberdares soon after breakfast and proceed south to lake Nakuru, which is often referred to as the pink lake for its great masses of pink flamingos. Arrive in time for lunch then embark on an afternoon game drive. Dinner and overnight at Flamingo Hill Tented Camp, (Full Board).

After breakfast, we embark on a game viewing drive as we exit the park and drive to Maasai
Mara via the Great Rift Valley to arriving in time for lunch. Full afternoon game drives till dusk
when we return to the lodge. Meals and overnight at Mara Sopa Lodge, (Full Board).
Mara Sopa Lodge is located on the slopes of Oloongams Hills, being one of the first lodges to be built in the Maasai Mara National Reserve. Guests are drawn to this lodge built in an ethnic
design, surrounded by a rich landscape, covered in fauna, from huge desert cacti to sweet-smelling jasmine flowers, all within the fabled Maasai Mara Game Reserve. The lodge boasts of
50 traditional round buildings with thatched roofs, each with 2 rooms.

Enjoy two full days exploring the park in search of the big 5. Have an early morning and late
afternoon game drives. Dinner and overnight stay at Mara Sopa Lodge, (Full Board).

After breakfast, we descend down towards the Great Rift Valley arriving at Lake Naivasha in
time for a delicious lunch at the Lake Naivasha Crescent Camp. The remainder of the afternoon
will be at your leisure, with the opportunity of going on a nature walk, hiring a boat to take you
to the famous Crescent Island, or simply relaxing by the swimming pool. Dinner and Overnight at
Lake Naivasha Crescent Camp, (Full Board).
Lake Naivasha Crescent Camp is located on the shores of Lake Naivasha at the heart of the
Kenyan Rift Valley, only 90 minutes’ drive from Nairobi. The camp is constructed using canvas
and has a capacity of 20 luxury tents. The tents are well furnished, have wooden floors and
adequate space generously created to allow free movement inside and outside at the guests’
comfort. Our luxury camp is constructed using canvas, all tents have en-suite bathrooms with hot and cold running water and flushing toilets. The tents have an ambiance and style decorated to give them a traditional tent look with all the comforts of home. We are proud of our cuisine which gives an appetite even to those on diet.

After breakfast, we drive past the scenic Athi Plains and into the bushy country of Amboseli
National Park - a landscape dominated by the spectacular snowcaps of Mount Kilimanjaro.
Arrival will be in time for lunch at your chosen Kilima Safari Camp is located in Kenya on the western border of the Maasai Mara National
Reserve. Kilima Camp has been built on a private concession bordering the current boundary, the
official perimeter of the Mara Triangle Wilderness Area (one of the tree contiguous administrative areas forming what is known as the Maasai Mara National Reserve also called the Maasai Mara). Kilima means “mountain or little hill in Swahili”. Kilima Camp is situated on the edge of the Siria escarpment (also called Oloololo escarpment) at 1,800 metres above sea level, overlooking the Mara River and the Maasai Mara plains are at an altitude of 1,500 metres. Hence Kilima Camp has a fantastic and phenomenal view over the Maasai Mara plains and the river Mara, truly “the Gods’ window” lodge / tented camp. After lunch and a few hours of rest, embark on a game drive at the foot of Africas highest mountain. Dinner and Overnight at Kilima Safari Camp, (Full Board).

Today you will spend the full day in Amboseli with early morning and evening game drives. Whilst in the park, you will have the opportunity to photograph the animals against the wonderful backdrop of Mount Kilimanjaro. All meals and overnight will be at Kilima Safari Camp, (Full Board).

After an early breakfast, we depart for Tsavo West National Park which lies roughly halfway
between Nairobi and the Coast. Mzima Springs, the chief marvel here is a favorite spot of hippos
and crocodiles. After lunch, head out on an afternoon game drive to see large herds of elephants, buffalo, common waterbuck, eland, rhino, and a wide variety of antelope. Dinner and overnight at Rhino Valley Lodge, (Full Board).
Rhino Valley Lodge is a tented lodge set against the backdrop of the rugged but scenic Ngulia
Hills of Tsavo National Park, the Rhino Valley Lodge offers the most idyllic view of the pristine
Tsavo West National Park which teams with thousands of wildlife including rhinos, can
be viewed all year round from the verandas of the Rhino Valley Lodge bandas as they frequent
the water pond just a few meters below the camp. Rhino Valley Lodge was previously known as
the Ngulias Bandas, Rhino Valley Lodge’s proximity to the coast – Mombasa, Malindi and
Diani, makes it a perfect holiday destination for those wishing to combine beach and bush safari
experience in the same vacation package. It’s the ultimate Kenya safari experience.
Rhino Valley Lodge is an unrivaled haven for those who love nature and a perfect retreat in the
wild. The nights have their own unique ambiance, a potpourri of hundreds of different animal,
birds, and insect noises.

We depart the lodge soon after breakfast and proceed to Tsavo East National park. The game is
viewed as we exit the park. This park was famed for its large herds of elephant covered in red
dust and fine scenery. We visit the scenic Lugards Falls, Mudanda Rocks (attracts elephants in
the drier season), and Aruba Dam. Dinner and overnight at Zomeni Lion Hill Lodge, (Full Board)
Zomeni Lion Hill Lodge is located on the boundary of Tsavo East National Park. The small
lodge sits on a hill, with views of the famous Tsavo East, it is an ideal setting for the renowned
scenery and wildlife of Tsavo. It is comprised of 10 rooms and 2 tents, each room has double or
twin beds and one single. Tents are uniquely designed and are comfortably furnished with their
own bathrooms.

Enjoy a Full day game drive spent exploring the park. Morning and afternoon game drives are
offered. The landscape in Tsavo East is flatter and drier, despite having one of Kenya’s largest
rivers flowing through the middle. Much of the wildlife is concentrated on the Galana River,
which has plenty of Crocodiles and hippos. Kudus, waterbucks, and dik-diks are also common
along the river banks. Dinner and overnight at Zomeni Lion Hill Lodge, (Full Board).

After an early breakfast, we board our vehicles and make the three-hour drive to the Indian
Ocean. We generally follow the Galana River for most of the way, passing charming Giriama
villages crowded with bananas and palms. Arrive at the palm-fringed Indian Ocean, where we
stay on one of the best beaches in Kenya. It's a good opportunity to relax after our adventures in the bush. Overnight at Diani Sea Resort, (Breakfast and dinner). The hotel grounds descend in a series of terraces to the curved pool and the white sandy beach.
The all-inclusive offers include a full board, a selection of locally produced drinks, and a variety of sports.

Days for leisure at the beach. Options include snorkeling excursions at the Marine National Park
and coastal bird-watching in Mida Creek Reserve or in the lovely forests surrounding the Gedi
ruins, an old Swahili town that was destroyed by the Zimba cannibals in the 15th century. Also,
you can go deep-sea fishing, windsurfing, sailing, and more. Overnight at Diani Sea Resort.
Breakfast and dinner.

Transfer to Mombasa Airport for your flight home. 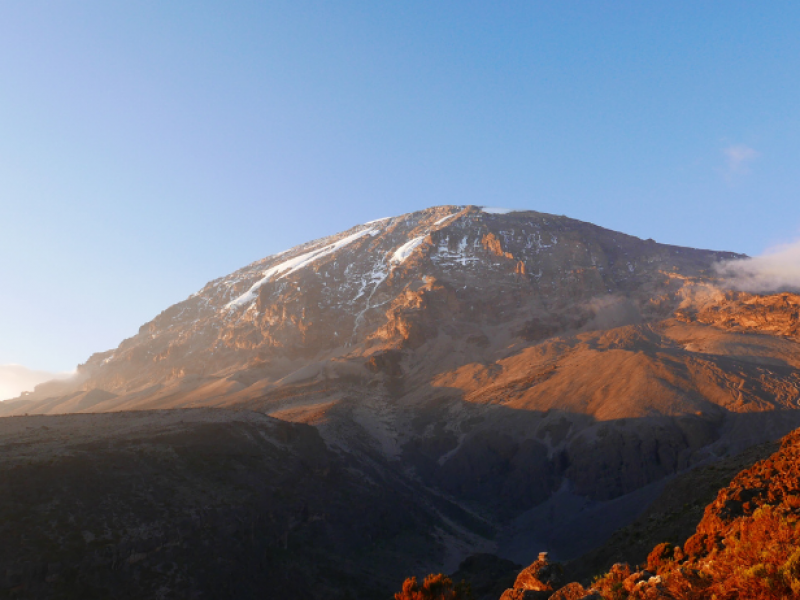 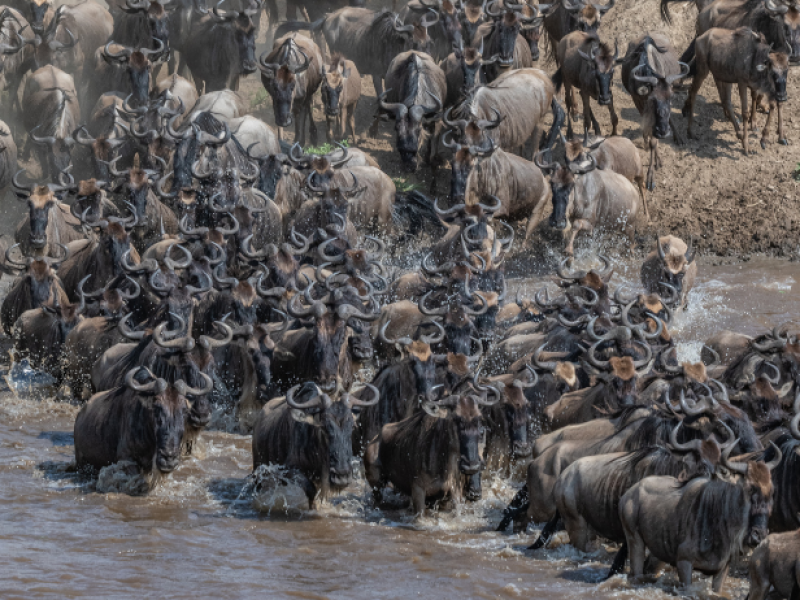 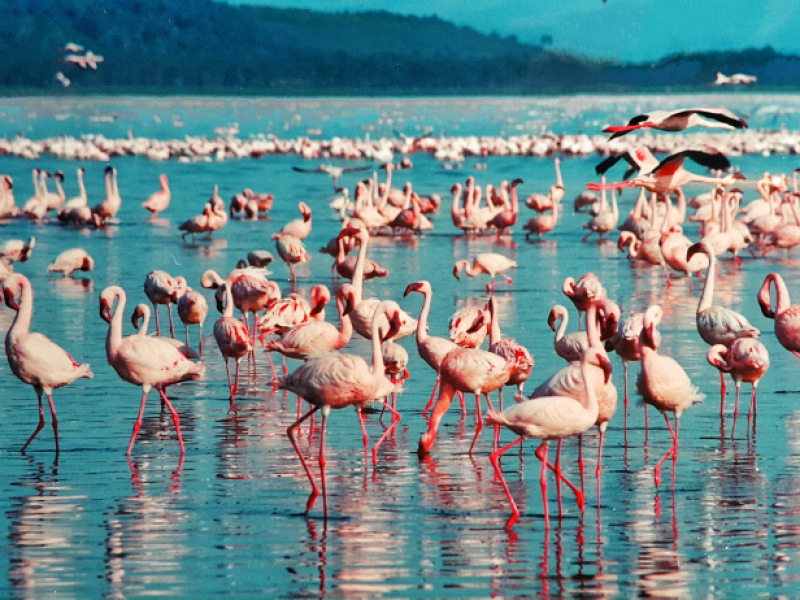